The Maritime Union of India (MUI) represents Merchant Navy Officers who are its members. We are affiliated to the International Transport Workers' Federation (ITF), London, U.K. which has around 700 unions representing over 4.5 million transport workers from some 150 countries as on January 2018.

MUI is also affiliated to the Hind Mazdoor Sabha (HMS), New Delhi, which represents a very large section of workers from various industries in India. We are also represented on Government and Semi Government Maritime Boards and Committees. We also liaise with seafarer training institutes and welfare organizations. 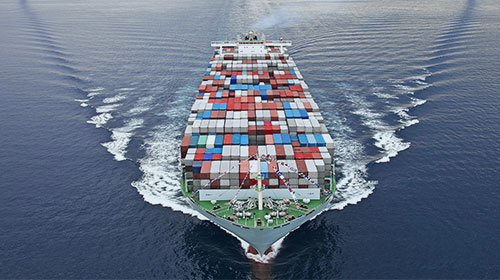 &quotYou have forged this weapon - but wield it wisely" Before independence, the Indian merchant fleet was composed of both, Indian and British owned ships that operated by India. ...
Read More

To maintain and protect Dignity, Prestige, Respect and Professional values of our members.To protest against those who indulge in practices leading to discrimination, ...
Read More

The Maritime Union of India (MUI) established on 3rd Dec. 1939, the only union representing Indian Merchant Navy officers has had an eventful and glorious past
Read More


On the occasion of World Maritime Day 2021, as part of the ‘Azadi ka Amrit Mahotsav’, the Maritime Union Of India along with the Indian Maritime Fraternity, presents

A webinar on Career Transformation for Seafarers

For any queries , kindly email at : muiww@maritimeunionofindia.com 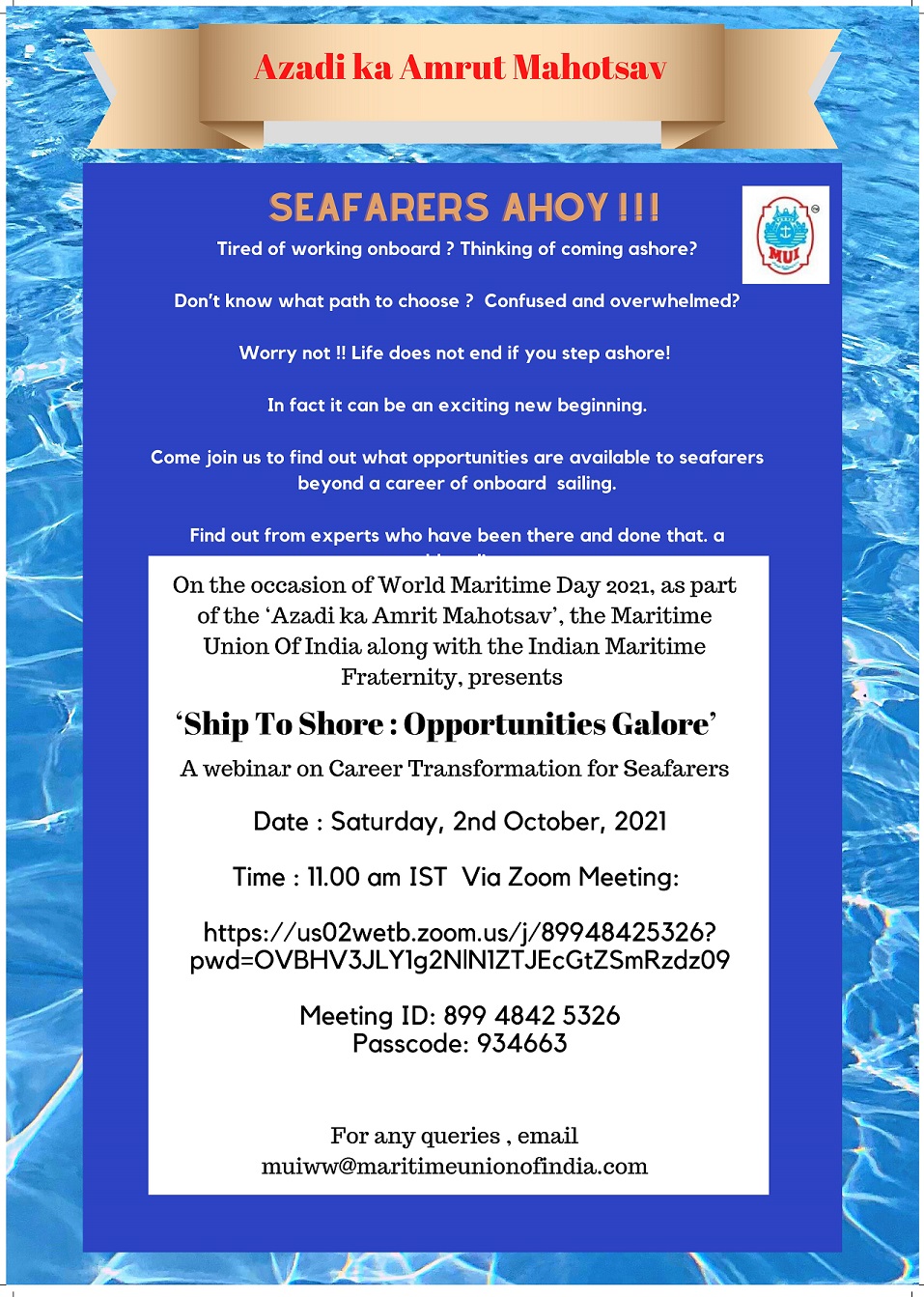 For any queries , kindly email at : muiww@maritimeunionofindia.com

Matter of Pride for The Maritime Union of India

It is a great pleasure to announce that Mr. Amar Singh Thakur - General Secretary - The Maritime Union of India has been selected as Member of Maritime Safety Committee (MSC) represented through the International Transport Workers' Federation (ITF), London.

The MSC is one of the five main Committees of the of the International Maritime Organization (IMO).

The Maritime Safety Committee (MSC) deals with all matters related to maritime safety and maritime security which fall within the scope of IMO, covering both passenger ships and all kinds of cargo ships.

The MSC also deals with human element issues, including amendments to the STCW Convention on training and certification of seafarers, keeping Safety in focus which is the need of the hour in our industry today.

MUI assures all that it will take this role very seriously and ensure safety, security and improved work regulations in the interest of our Indian Seafarers.*

NOTICE TO ALL MEMBERS OF THE MARITIME UNION OF INDIA

We are attaching Notice for the meeting.

Booklet for the AGM has been despatched to all respective residence address. 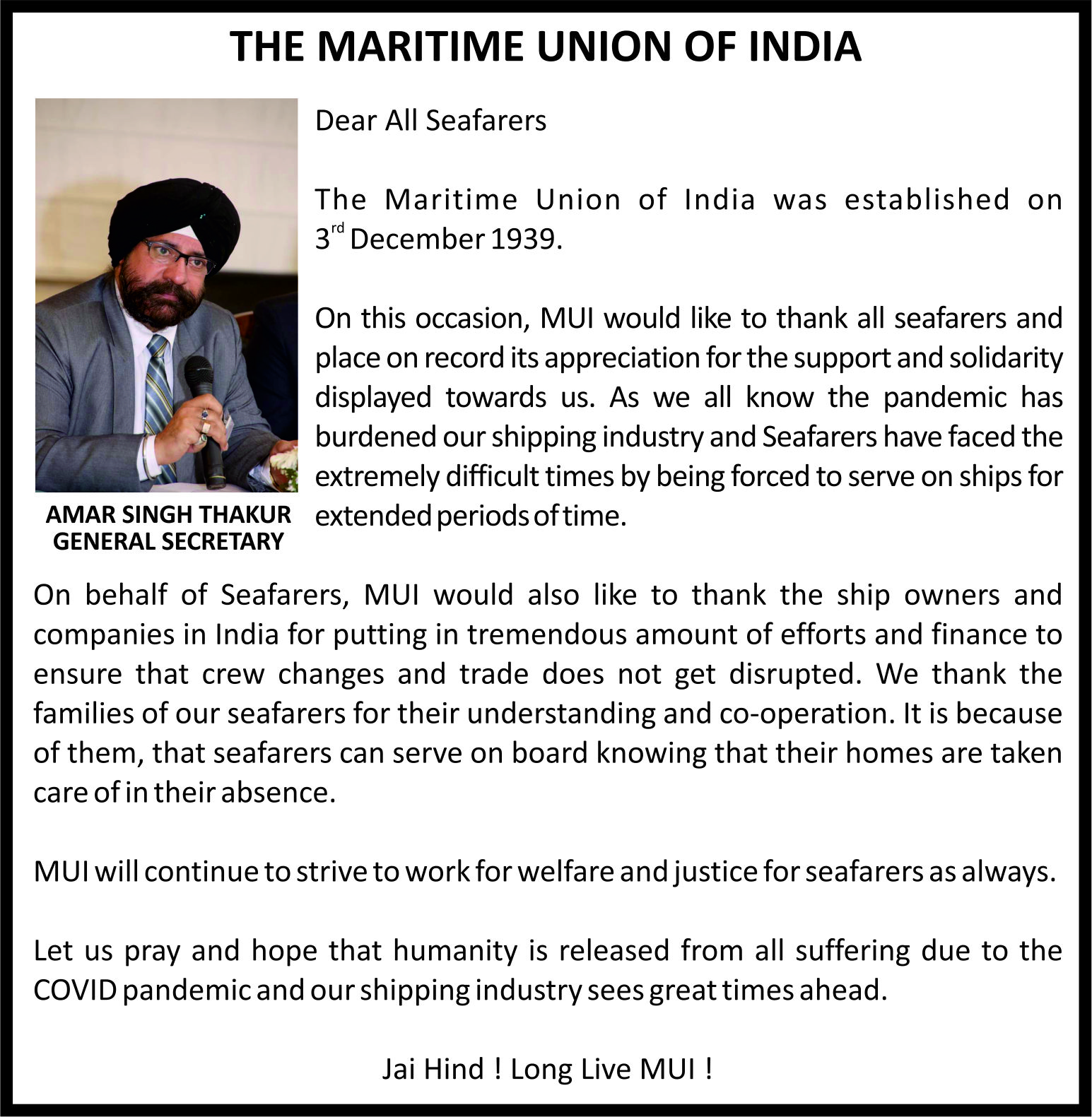 FILING OF INCOME TAX FOR SEAFARERS

This is to inform all Seafarers that The Maritime Union of India has already filed Petition / Representation for relaxation of conditions of number of days to retain NRI status of Seafarers.

Hence, in the meantime it is advised that all Seafarers should file their Income Tax Returns for financial year 2020-2021 on or before the extended due date declared by the Income Tax authorities.

If the Returns are filed within the due date, the same can be revised after declaration of outcome of the filed Petition I Representation.***

Petition against injustice towards NRI status of indian seafarers - Budget 2020